She might look cute here but her appearance is deceiving.

Gigantic and extremely ferocious, she spends a majority of her time suspended in a special pool that helps her give birth more easily. She is a sharp contrast to Sam - Skillya sells her babies knowing exactly what kind of lives they’ll lead. While on the surface they’re less oppressed than the Mudokons they torment, no reasonable Mother would allow her children to live in such conditions.

Gluttonous and cruel, she loves to be surrounded by her favorite foods and adorns herself with flashy jewellery.

Skillya sells the Sligs as security workers and directly benefits from it. The explanation for her behaviour is simple - she hates her children.

The birthing process is so painful for her that it fills her with a deep hatred towards those she considers responsible. Her anger surfaces in other, even more unusual ways, too - it isn’t uncommon for her to eat her children as soon as they’re born, just as pay back for the suffering they cause her during delivery.

Maybe the Sligs inherit their Mother’s mean streak, or perhaps this goes some way to explaining their sadistic behaviour. On top of never having known any love or affection, the Sligs also have to deal with the fact that if they don’t scramble away fast enough when they’re born their Mother might just eat them alive.

Everything in Skillya’s lair is tacky, from the mismatched pillows she demands be constantly fluffed to the ugly lamp shades and the general mess. She isn’t known for her elegance. She’s always at risk of being crushed by her own weight and, like the Mudokon Queen, she can’t move unaided. She also spends her days surrounded by television screens, a huge tray of food in front of her, but the only pain she has to numb is the physical one. 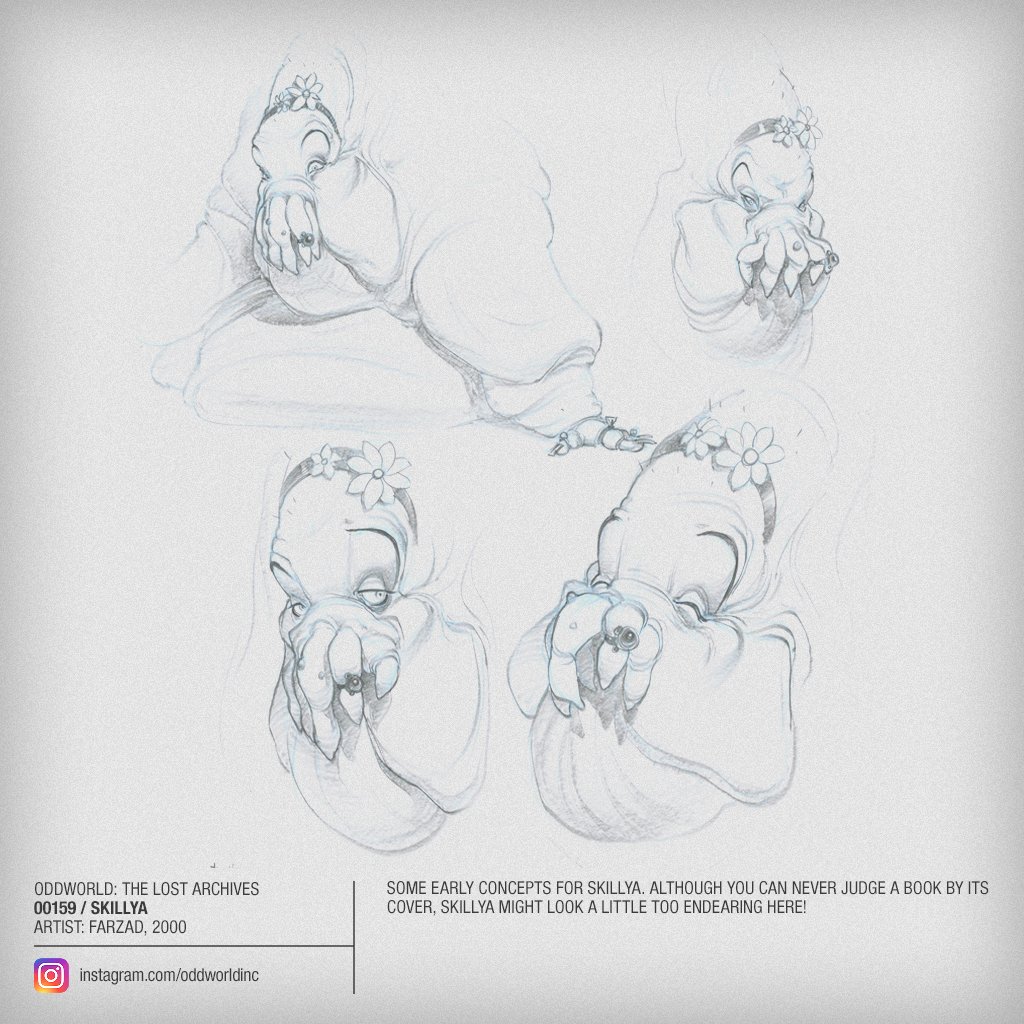 Don't be fooled by that face! 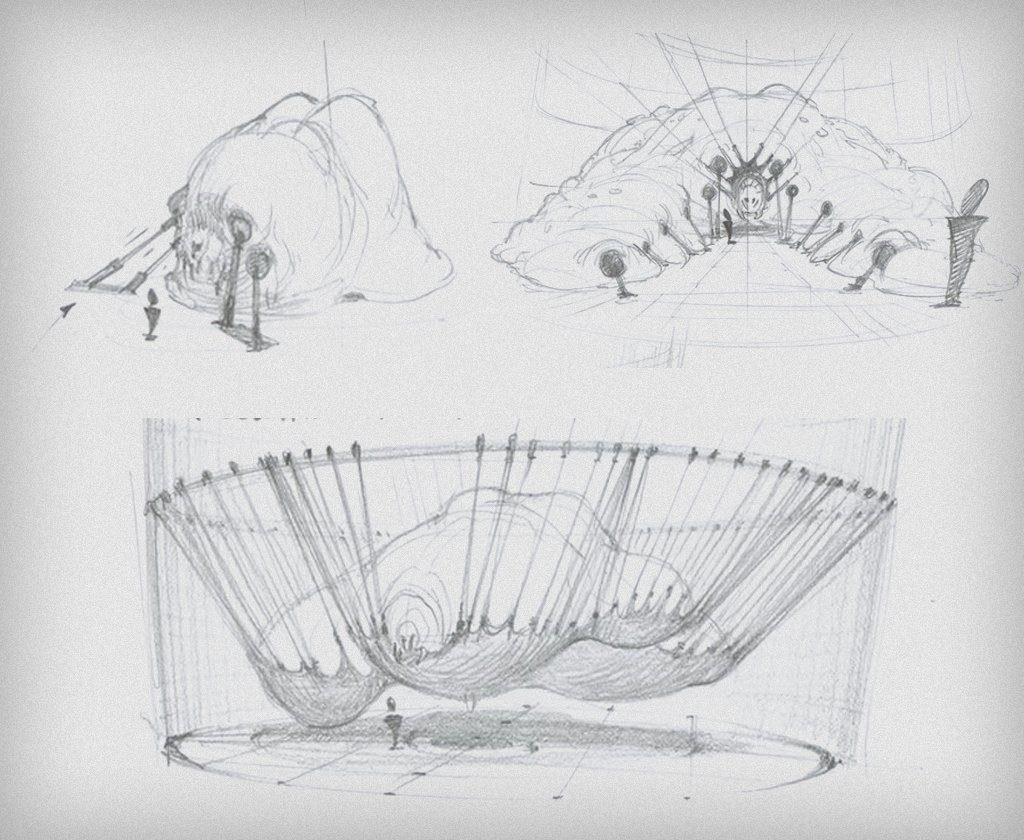 Skillya is so huge that special measures would need to be taken to ensure she doesn't suffocate beneath her own weight. Here she's held up by hundreds of metal poles. 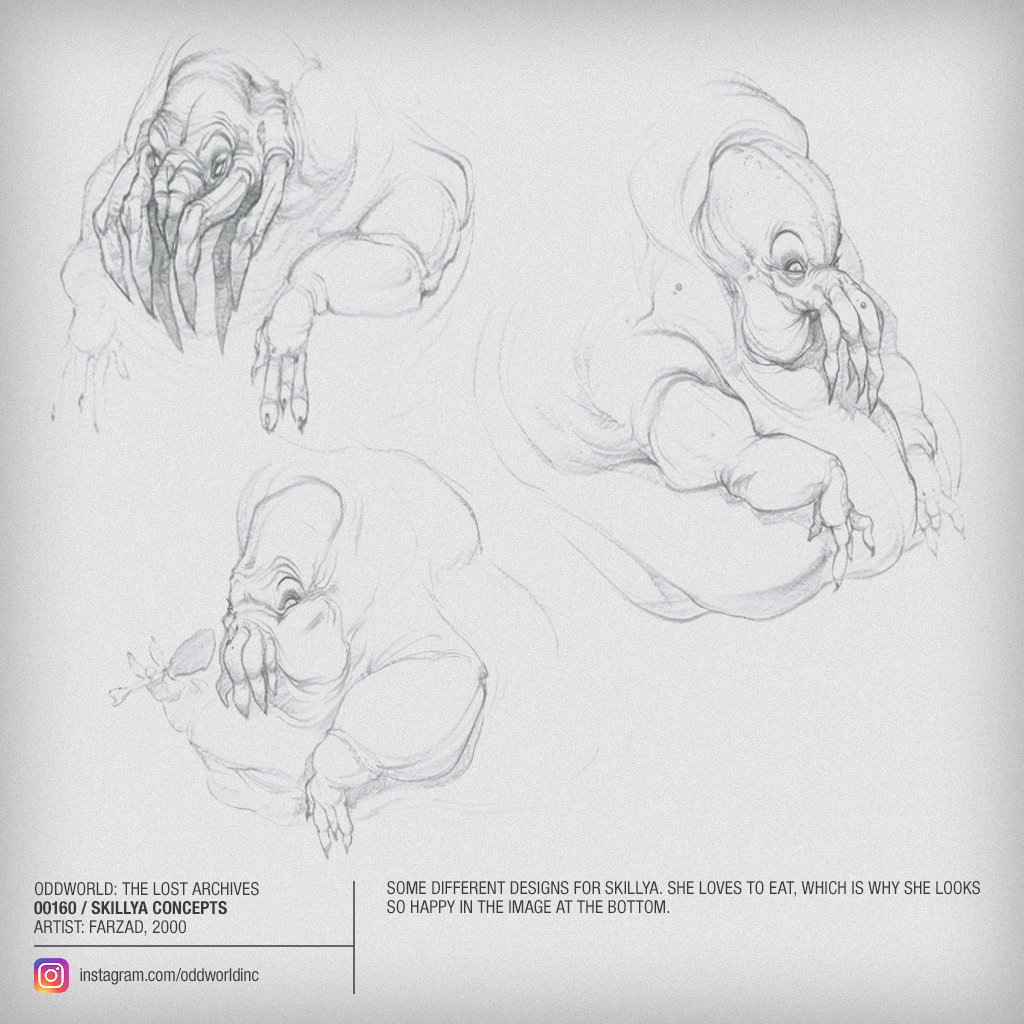 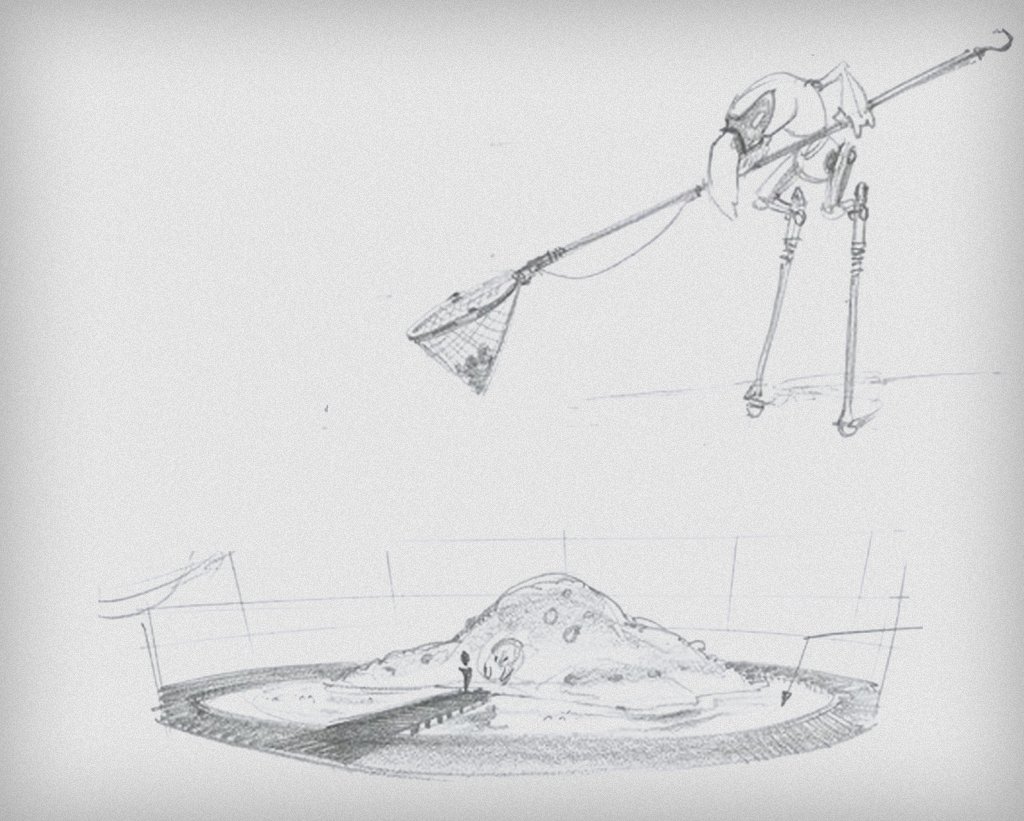 We though Skillya might spend some of her time in a birthing pool. A large portion of her body would be submerged underwater, and Sligs would be patrolling with stilts and nets to scoop the babies out the water before she can eat them. 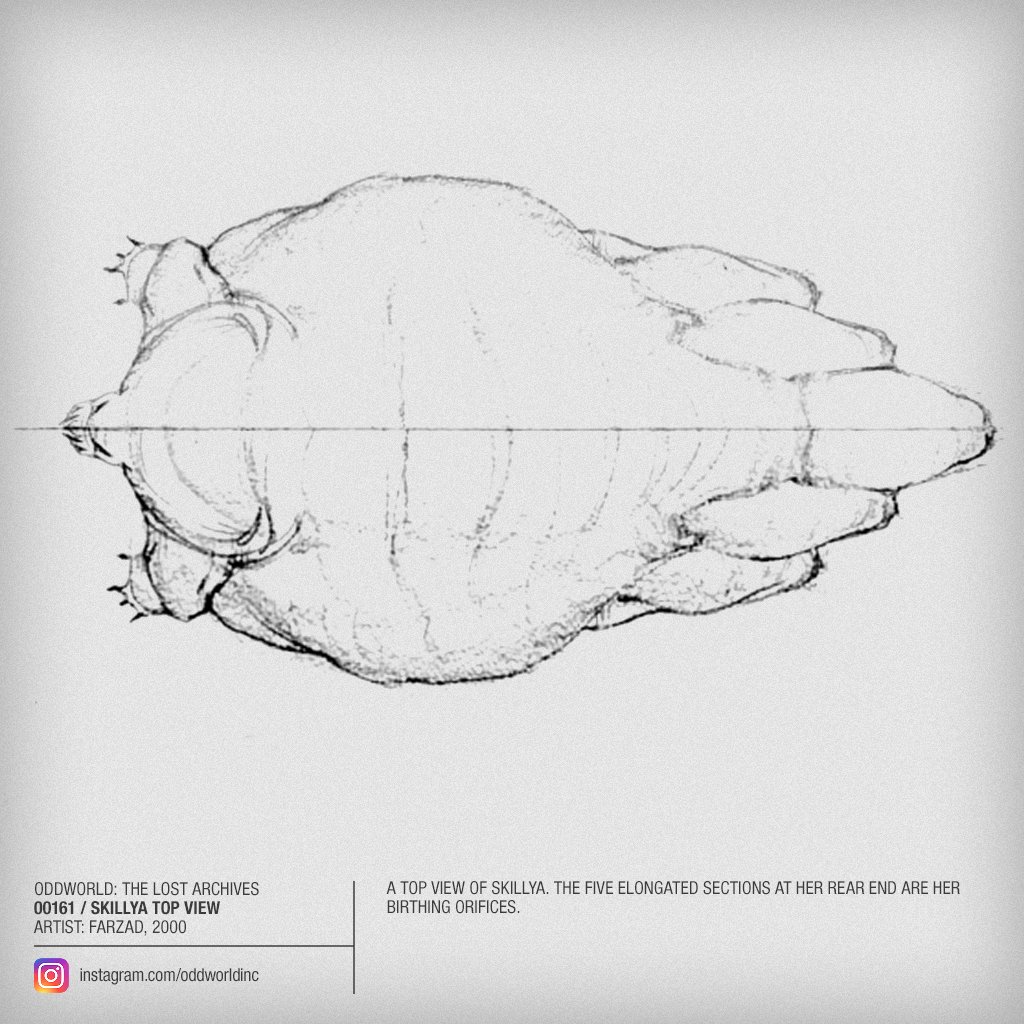 A top view of Skillya. 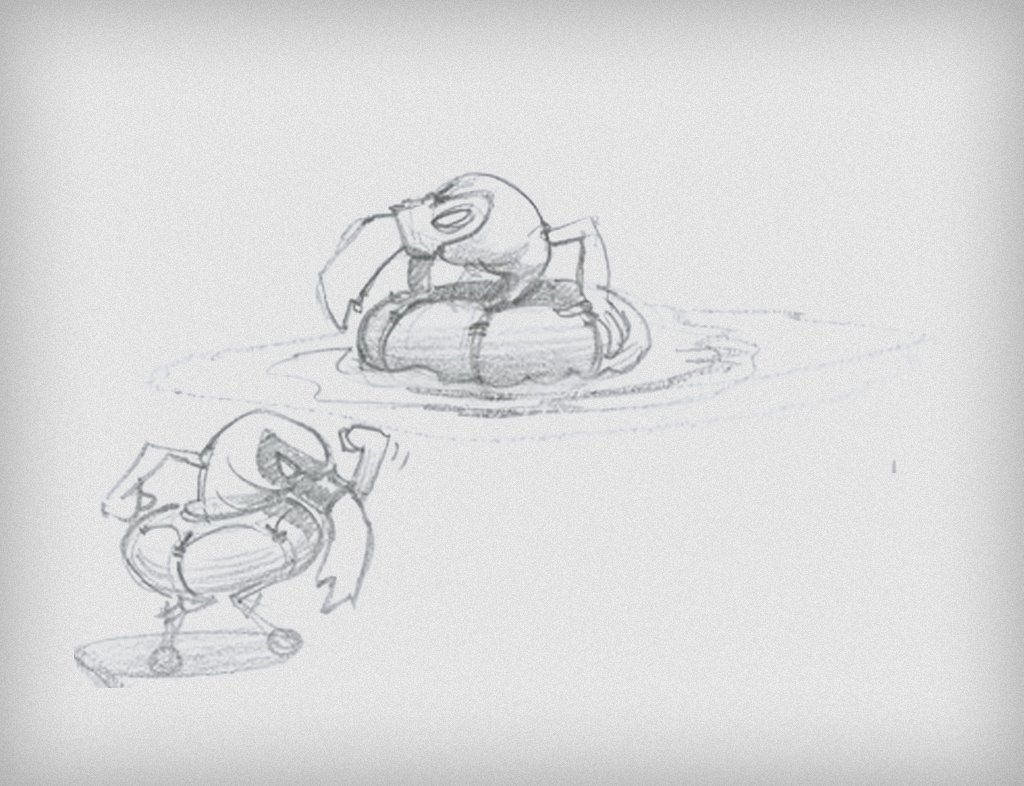 Sligs with flotation devices, they would jump into Skillya's birthing pool and help to move her around. 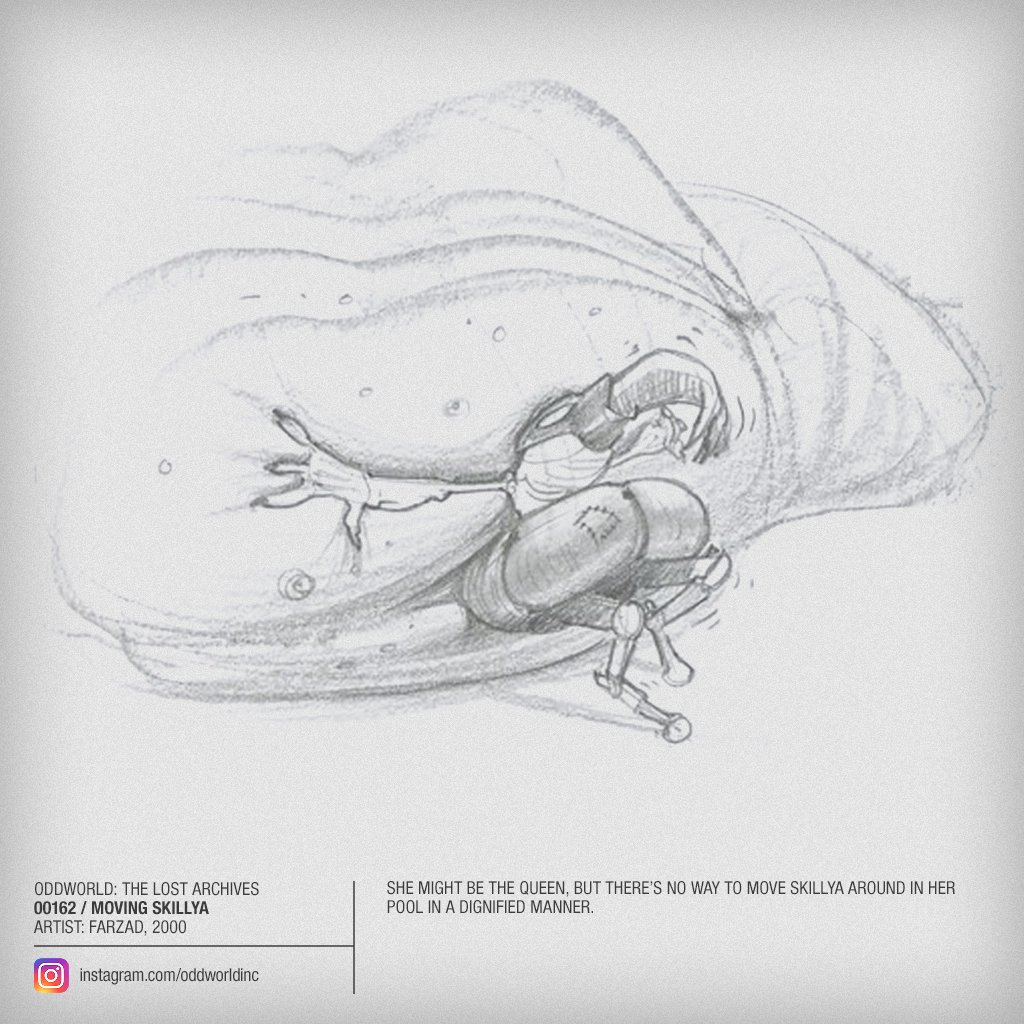 It might not be transport befitting a Queen, but sometimes a Slig with a rubber ring is the best you can do. 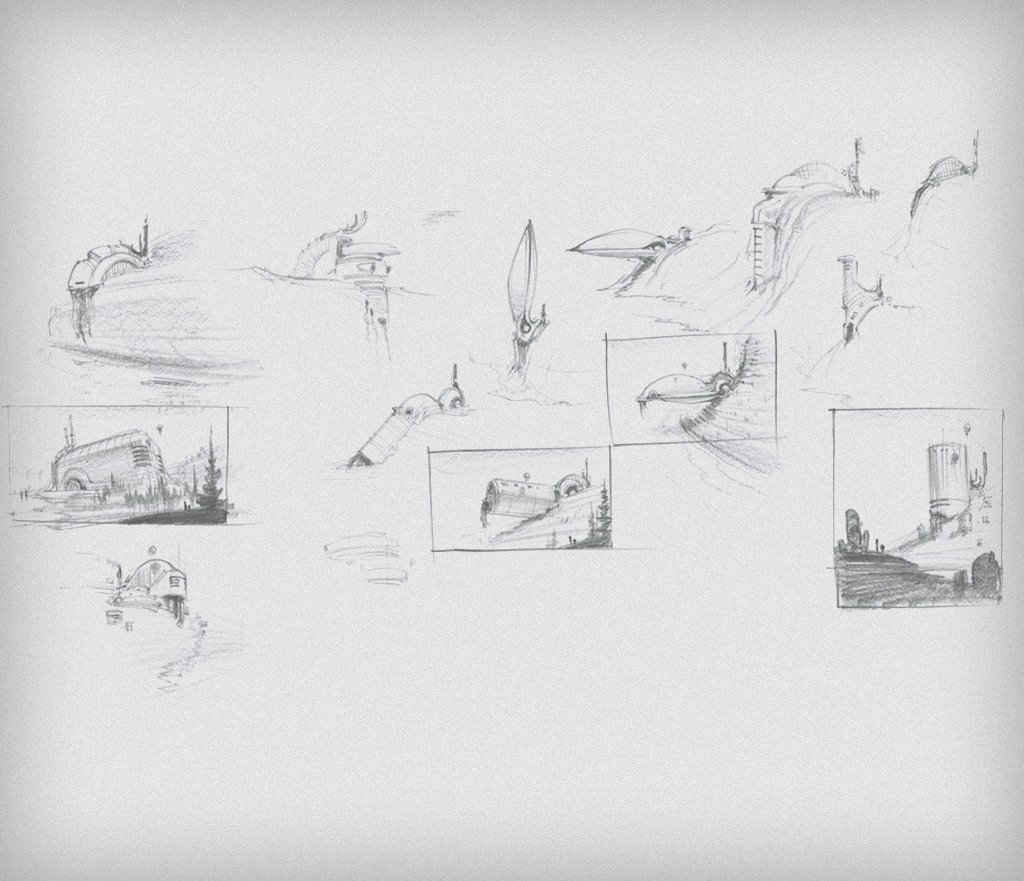